The early 1870’s saw a manifestation of the American coastal resort movement. The only way to Tybee in those days was via daily steamship service.

The first hotel here was established in 1873, The Ocean House. In 1876 a horse drawn railway connected Main St. (now Butler Ave) to the back river and inlet so guests could enjoy the calmer waters of the back river.
By the 1880’s Tybee Island had become a seaside resort with many bathhouses, dancing pavilions, boarding houses and summer cottages springing up. Tybee was known for it’s healthy salt air and water believed to have healing powers. 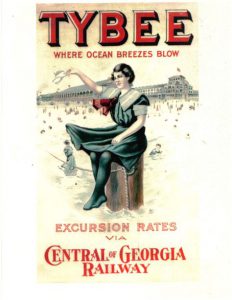 In 1887 the Savannah to Tybee Railroad was completed. Previously the only way to the island had been the steamship service. This rail service cut the travel time to Tybee Island in half. There were 8 stops on Tybee from the North End to the back river. In 1890 the railroad became part of the line “The Central of Georgia” and connected cities and tourists throughout cities in Alabama and Georgia to Tybee Island.

In 1891 The Hotel Tybee opened on the strand between 11th and 14th streets followed by a boardwalk and pavilion.

The actual “Tybee Road” was completed in 1923 and ushered in the golden age of Tybee Island as a resort destination. The Tybee Road connected downtown (Victory Drive/Thunderbolt) to the North end of Tybee Island. After that time businesses sprung up and boomed.

By the mid 1920’s there were over 400 private cottages on our little island. Because of “Tybee Road” one could now live here year round.