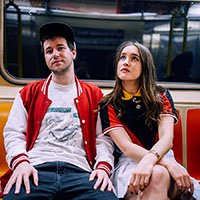 As NPR writes, “siblings Clyde and Gracie Lawrence are not your typical pair.” Clyde Lawrence and Gracie Lawrence have been writing songs and listening to countless Stevie Wonder, Randy Newman and Aretha Franklin records in their family’s New York City apartment since they were little kids. After years of playing together, they officially created Lawrence, an eight-piece soul-pop band comprised of musician friends from childhood and college. The band has since gained a devoted following for its high-energy, keyboard-driven sound, which features tight, energetic horns, explosive lead vocals and fully-live arrangements.

Lawrence has sold out headline shows across the country and appeared at festivals including Bonnaroo, Outside Lands, Firefly, Okeechobee, Hangout and many more. The band has also opened for notable acts such as Lake Street Dive, Vulfpeck, Jon Bellion, Soulive, Jacob Collier, Blues Traveler, O.A.R, Bernhoft and others.

Tickets are $20/person in advance and $25/person at the door. A limited number of VIP tickets are also available for $60/person. To purchase tickets, please visit Ticketmaster.com.